Superstitions run rampant in the South.  Some of the more well-known ones are:  step on a crack, break your momma’s back; don’t cross a black cat or you’ll have bad luck; don’t walk under a ladder, or you’ll have more bad luck; break a mirror and you’ll have 7 years bad luck.  I like to focus on the superstitions that bring good luck, such as, find a penny, pick it up and all day long you’ll have good luck, or rubbing a rabbit’s foot, or my favorite – eating black-eyed peas and turnip greens on  New Year’s Day to ensure a prosperous year.

For the past fifteen years, my husband and I have hosted a Hoppin’ John party to provide tasty black-eyed peas and turnip greens for our friends in hopes of bringing another year of good luck.  The suggested origin of this tradition dates back to the Civil War, when Union troops, especially in areas targeted by General Sherman, typically stripped the countryside of all stored food, crops, and livestock, and destroyed whatever they could not carry away. At that time, Northerners considered “field peas” suitable only for animal fodder, and did not steal or destroy this humble food.  These peas are what kept many southerners from starving.

A traditional New Year’s Day meal in the south consists of black-eyed peas, greens (collard, turnip or mustard), ham and cornbread.  The peas, since they swell when cooked, symbolize prosperity; the greens symbolize money; the pork, because pigs root forward when foraging, represents positive motion.  And the cornbread, well, it’s just good eats.

Here is my New Year’s Day menu, which has served us well in the luck and prosperity department:

Here is a picture of the beverage table greeting my guests on the front porch.  They were able to enter the house with their beverage of choice and immediately feel at home. 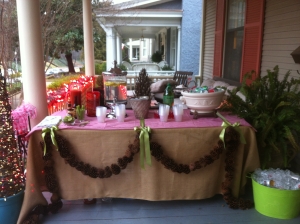 Hoppin’ John was originally an African-American food, before spreading to the entire population of the South. Hoppin’ John may have evolved from rice and bean mixtures that were the subsistence of enslaved West Africans en route to the Americas. Hoppin’ John has been further traced to similar foods in West Africa, in particular the Senegalese dish, thiebou niebe.

Put soaked peas, ham hocks or ham bone, chicken broth, onion, bay leaves and thyme in a large stock pot.  If chicken broth does not cover the ingredients, add more broth or water.  Bring to boil, then lower heat to simmer.  As the peas, etc. cook, a foam will form on top – skim off the foam and discard.